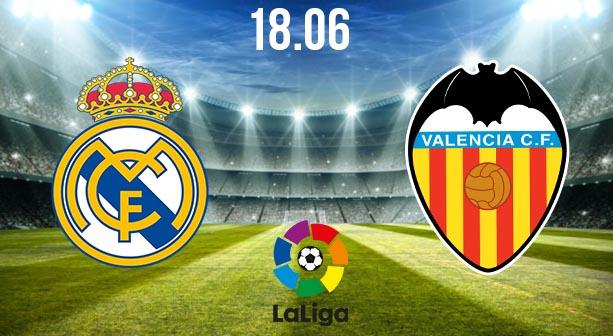 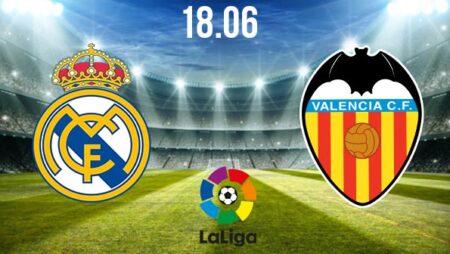 The two-horse race in La Liga is back again after it disappeared last season. Los Blancos can not be calm yet until they take over the top of the table. With only two-point difference, anything is still possible. Each and every game of them is as important as the final. This midweek fixture is surely one of them when they are welcoming Valencia at home. Their opponent is still stuck on the 8th in the standings and has not shown any improvement yet after the break.

Real Madrid began their campaign after the restart with a sufficient 3-1 win over Eibar. Toni Kroos, Sergio Ramos and Marcelo scored the winning goal before conceding one by Pedro Bigas’s strike which was wrongly anticipated by Thibault Cortois.

Valencia, on the other hand, were unable to secure three point while hosting Levante. They were held in 1-1 draw. Rodrigo Moreno was able to find the back of the net on the 89th minute. Unfortunately, such prospective win was denied by Gonzalo Melero’s penalty at the stoppage time.

Zinedine Zidane tends to employ the 4-3-3 formation with Hazard, Benzema and Rodrygo as the front trio. The fluidity on the attack and defence created balance in Madrid’s system of play supported by the versatile Luka Modric and Toni Kroos plus Federico Valverde or Casemiro behind them.

The former Barcelona and Madrid player, Albert Celades has always been in favour of 4-4-2 formation relying on direct football with long cross and shots instead of the ball possession. Yet, he might need to modify his formation or approach against Madrid, which certainly will be the dominant side of the game. The 5-3-2 formation should be ideal for them as well as potentially frustrate Zidane’s men.

Since his arrival from Chelsea, Eden Hazard has not shown his maximum potential yet. The series of absence due to his injury prevented him from performing well on the pitch. Yet, last weekend could mark his revival as he contributed his third assists this season in all competition. It will be interesting to see how this Belgian international continue his positive form against Los Ches. Another notable name to watch is of course their top scorer Karim Benzema.

In Valencia’s squad, their top performers are the former Real Madrid B man, Dani Parejo, who is currently the club’s second top scorer with eight goals and three assists, the youngster Ferran Torres and the top scorer Maxi Gomez.

Sergio Ramos and Co might have learned Celades’ men tactic which led them to a draw result in the first meeting. Thus, they are definitely attempting on more creative attack, which is now possible with the return of Hazard from his injury. However, Valencia could also take the reference of Athletic Bilbao, Celta Vigo, Levante and Real Betis which could hold them a draw and even beat them with defensive and counter attack approach. Such is worth trying to make Los Blancos stumble again in their home turf.

The punters surely put their money on the home side. They are projected to win at 1.35. Dani Parejo and Co are only backed to win at 7.75, whereas the draw result is at 5.00.